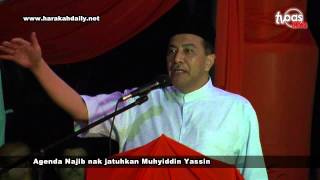 The Barisan Nasional (BN) chairman also took a dig at Datuk Husam Musa as the PAS candidate for Putrajaya seeks to canvass votes from civil servants since his candidacy was announced last week.
“I have never forgotten the deeds of civil servants ... If you love me, help me soon,” Najib told a packed auditorium in The Everly hotel here as the crowd held up “I love PM” signs.
“If in these last few days someone asks to have tea with us in the canteen, please be careful,” Najib said, referring to Husam who has been approaching civil servants in Putrajaya recently.
“This is not the issue of him being from ‘negeri ambo’ ... It’s about our country’s future,” he said, referring to “my state” in the Kelantan dialect.